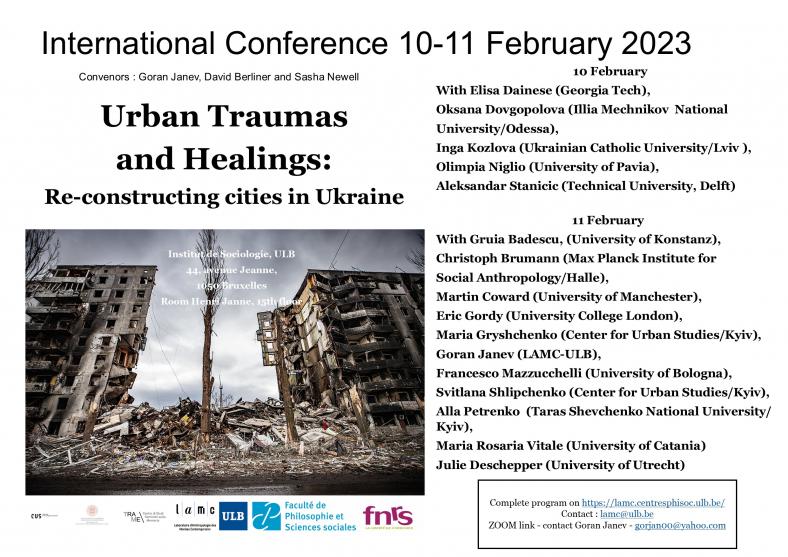 The urbicide is the ultimate tool of terror intended to kill off hope, resistance, and ultimately the identity of the citizens under attack, as much as gaining military advantage. It is not a novel invention of the modern warfare, but a particularity of each case disallows certainty in overcoming it after the war is over. Cities bouncing back to life is never a warranted outcome of re-building efforts and timely consolidation of knowledge could greatly improve successful re-building. The urgency of Ukraine crisis demands a careful examination of the amassed knowledge and experience. Beirut, Sarajevo, Hiroshima, Dresden, Warsaw, Homs, and hundreds other were cities killed in war and then reborn in the distant and more recent past.

An ever-growing body of literature, at the crossroads of social sciences, urban sociology and heritage studies, reveals the multidimensional complexity of reconstructive politics in postwar settings. How local experts and international organizations attempt to produce landscapes of healing? How former and new residents perceive such endeavors with regard with their own stories of suffering and exile? How such reconstructed cities trigger palimpsest multilayered memories? Mariupol, Kharkiv, and dozens of other cities in Ukraine are being destroyed right now. With this conference we aim at gathering expertise by social scientists and making it available to all concerned parties that will engage in the difficult re-building efforts. Architects, urban planners, and engineers will have to be informed by social scientists how to approach the re-construction as it entails re-settlement and re-population as well.

In cooperation with scholars from Ukraine we intend to bring together a distinguished international panel of experts to consider various aspects necessary for revitalization of those devastated cities. In this conference, external experts will share their knowledge with the local academic community, but also the experts have to find ways to include the survivors and returnees in designing the cities back to life. Participatory planning is a difficult task even under normal circumstances, yet it must not be forlorn in the name of efficiency. List of problems to be addressed is never going to be short and priorities will shift depending on the standpoint taken. Rather than being startled, we are encouraged to tackle as many of those challenges and thereby the interdisciplinary approach should help us gain greater comprehension. Art and heritage, culture, identity, way of life, and life itself are under threat of annihilation, yet memories, narratives, stories of destruction and loss, hope and perseverance will find their way to the surface of public consciences and will eventually prevail and we intend to maintain them prominent.

This conference is just one segment of a much larger academic endeavor, although it can fully serve its purpose as a singular event. The engagement with this topic began by Ukrainian scholars themselves looking for speakers for a series of on-line talks that will commence in mid June. After the conference, while serving the central role for networking and establishing partnerships, we intend to initiate a long-term research project that would address not only the design and re-construction of cities, their residential and business functions and public spaces, but also contemplating over the haunted spaces of suffering, commemoration, and overcoming and productive transformation of traumatic memories.

Program of the conference here